Jam Levels are one of the level types in some fanons. This level type doesn't exist in the original game, but exists in a similar way in Candy Crush Soda Saga.

In CC071, Jam levels are not very common, especially because they are introduced very late (in Level 686) and because even after that level, they are still not common since there are usually 1 to 3 per episode. The song played in this level type is the same as the Ingredients song on mobile (Timed song on Facebook).

In Candy Crush Sugar Saga, jam levels are rather common after their debut episode. Usually, an episode has at least 2 jam levels. Jam levels are introduced in Level 826.

In Trinket9's Candy Crush Saga Jam levels are introduced at level 106. After that, they're pretty common being on average the most used non-original level type (although Energy is a close 2nd). Most episodes have 1-3 jam levels.

In FCS, Jam levels are very common, with 3 to 5 in most episodes. However, this can be attributed to them being introduced very early compared to most fanons, at only Level 16.

Jam levels are introduced in Level 64 and are somewhat uncommon afterwards. The jam to spread varies from level to level (regular, green, syrup). The first mixed level with jam is Level 83, which used to be extremely troublesome before it was nerfed. There is normally one or two jam levels per episode but some of the episodes don't have any.

They will be introduced in the 68th episode. In this fanon, 6 types of jam exists. Their colours and properties are as follows:

To win a jam level, the player must spread the jam through the entire board (excluding chocolate spawners). This is done by making matches in squares with jam and without it at the same time. Special candies like striped or wrapped candies might help you with that, and jelly fish on squares with jam will spread the jam to the other 3 squares it hits when activated. A color bomb + color bomb combination made in jam squares makes you win automatically if there are no blockers on the board. You get 1,000 points for every tile that you cover up with jam.

There is also green jam squares that can only be spread with effects of special candies, but fanon makers sometimes specify their own properties of this type of jam.

When the jam has been spread, a striped candy is made for every move remaining, giving 3,000 points for each. Then each of the striped candies activate themselves. 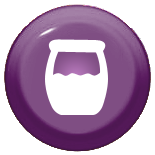 Yellow jam
Add a photo to this gallery
Retrieved from "https://candy-crush-saga-fanon.fandom.com/wiki/Jam_levels?oldid=132711"
Community content is available under CC-BY-SA unless otherwise noted.