The Krusty Candy is the first episode from World One of Candy Crush Saga 3. The difficulty of the episode was Extremely Hard! You get free 100 gold bar from CASG! Candy Factory is coming up!! 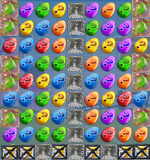 Retrieved from "https://candy-crush-saga-fanon.fandom.com/wiki/The_Krusty_Candy_(CCS_3)?oldid=78861"
Community content is available under CC-BY-SA unless otherwise noted.