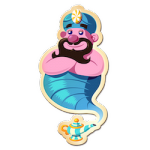 Hi, I'm Bp101697, you can call me Bp. I'm the old staff in Angry Birds Wiki. In this wiki, I created fanon named "Candy Crush Saga: Candies Revenge" or CCR.

Dreamworld: 730 (which is more than real DW levels) (cancelled)

I decide to make insaneworld. This world contains 300 mind-blowing levels. If you dare, try to beat this.

Note: There will have the second phase that will contains levels 301-500 as season 4 and season 5.

Episodes 10 and 15 of Insaneworld Plot

In insaneworld, all seasons except for season 1 have one "Boss Episode" at the very last in each season. Episode 10 (Season 2) is named "Mysterious Mountain" and episode 15 is named "Supreme Strike." Those episodes are generally much harder than others.

There are 20 levels in this episode. There are four sections. Section one is the easiest because it is just warming up. This contains levels 181-184. Second is the harder one, containing levels 185-192. Third is a bit easier than second section, containing levels 193-195. The last five levels are in section four. Those are super difficult.

There are 20 levels as well as other ones. There are six sections. Section one contains levels 281-282, which is the easiest part in this episode. Second contains levels 283-285. This is the harder section. Third section contains levels 286-289. This is much harder than first two sections. The fourth one, 290-293, is the highlight. This section is super hard and is almost impossible to beat without boosters! The fifth is much easier than the previous, containing levels 294 and 295. The five last levels are conclusion of insaneworld, which are also super difficult. Beating level 300 to earn five of each boosters and 100 gold bars.

All levels in this list (Extremely hard levels and Nearly impossible levels) must have this category. Note that tick symbols show the existed levels in CCR.

Retrieved from "https://candy-crush-saga-fanon.fandom.com/wiki/User:Bp101697?oldid=126751"
Community content is available under CC-BY-SA unless otherwise noted.